Early and Definitive Detection of Glaucoma in Dogs and Cats 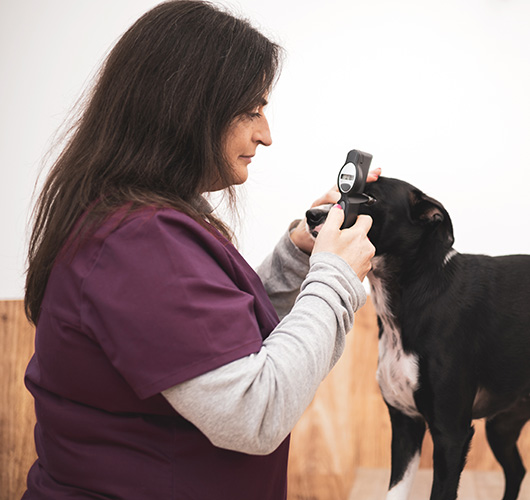 Strange Pet Behavior? Consider Glaucoma. Glaucoma is a highly painful condition for pets caused by increased pressure / increased fluid in an eye. It's hard for pet owners and for most veterinarians to detect. Therefore, the first signs are often changes in behavior such as irritability, peeing indoors, loss of appetite, or lethargy. Healing Springs has the ability to definitively diagnose glaucoma using a device called a tonometer. This device can measure the amount of pressure in the eye. The early detection enhanced by a tonometer may spare your pet months or years of pain and eventual blindness.

As the glaucoma gets worse, you may see a yellow-green discharge from the eye, reddened eye, enlarged blood vessels in the whites of the eyes, apparent impaired coordination which is actually impaired vision in one eye, clouded cornea or bluish tint to one eye, or dilated pupils that don't shrink with light. In its late stages, you can actually see the eye swelling and bulging. However, you really want to diagnose glaucoma before this sign.

Glaucoma eventually leads to blindness in the affected eye if not caught soon enough, but the worst consequence is the constant pain. If you suspect your pet may have glaucoma, bring your pet to Healing Springs Animal Hospital. We have extensive on-site diagnostic capabilities for this and many other important concerns.

Did you know that veterinary acupuncture for pain control is comparable to major opioid drugs with none of the side effects? Healing Springs provides Certified Veterinary Acupuncture. We find it very helpful for other cases such as chronic back pain in pets, severe arthritis, pets that can't walk due to neurological conditions, and much more.

Many pet owners must travel to a referral center for this, but abdominal ultrasound is available at Healing Springs Animal Hospital in Galax, by appointment. This non-invasive imaging can reliably detect abnormalities of the stomach, kidneys, spleen, adrenal glands, etc. Even though our doctor performing these ultrasounds is highly experienced, our rates prove much more affordable than most alternatives, making a fast and accurate diagnosis more readily available for our clients.

No Power? No Problem

Healing Springs uses a 20KW generator that powers up automatically in the event of a power outage. If one of Appalachian Power’s transformers blows out while we’re in surgery with your pet, no worries. Even if power goes out for the whole region again, your pets who are boarding at Healing Springs will be sitting pretty in air conditioning.

Healing Springs is the first and only veterinary clinic in the region to offer lap spays. Laparoscopic spays are performed through a tiny hole using specialized equipment. The procedures prove much less painful for your pet, and recovery goes faster.